At last I’m getting to another post!  I have had plenty going on as usual. I have just finished two life sized pieces for Sydney Motorsport Park.  This is a fitting permanent home for some of my work.  I am hoping that their patrons will get a bit of a kick out of my racers.  The two pieces go together to portray a race between an early vintage three wheeled Morgan, and a similarly early era racing motorcycle.  These pieces are at the same time, both very different to my normal subjects, yet are still very much my signature style of subject. Early Bikes and Three Wheelers are some of my favourite subjects, but this is only the second time I have done a car sculpture even close to this scale, and the motor bike is a first. Things on this scale are harder than they look. 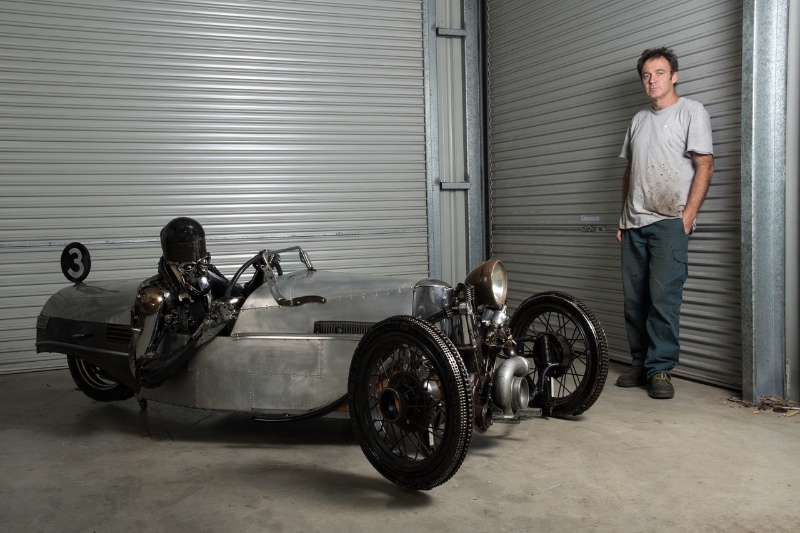 To make these pieces work, I had to find a balance between using real car bits in the right places, and using other wrong car bits not in the right places.  I couldn’t have it looking like a real car, but nor did I want it looking like little bits of junk welded together to give the shapes.    It could easily end up an unappealing mess. I decided to make some parts of the finished product relatively ‘ normal ‘ car and make other parts the artistic features.  The engine, the tyres, and of course the driver were to be the features.  It always tests your brain a bit working to a scale different to what you have become used to, and this means thinking about a whole set of parts that I would not use in a smaller car sculpture.  The trade off  ‘easy bit ‘ to this scale is that I can easily get a volunteer to model the driver or rider’s posture and dimensions. 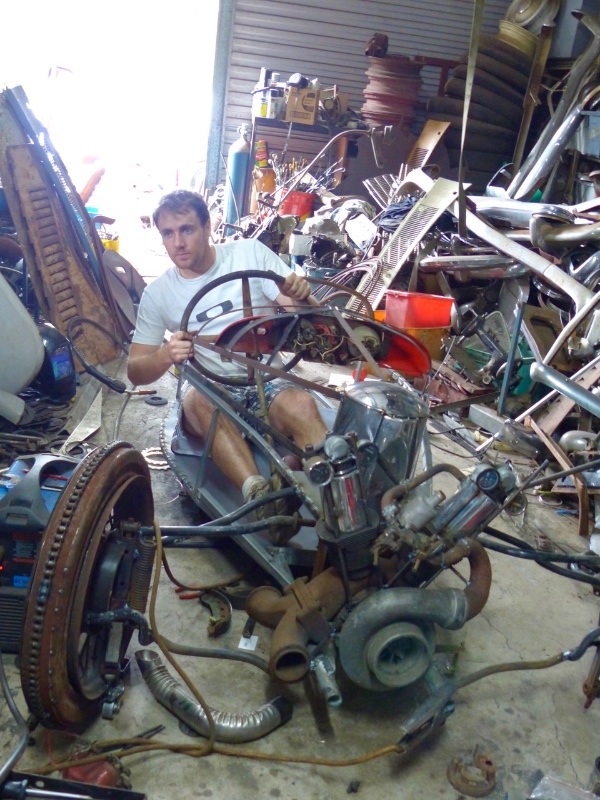 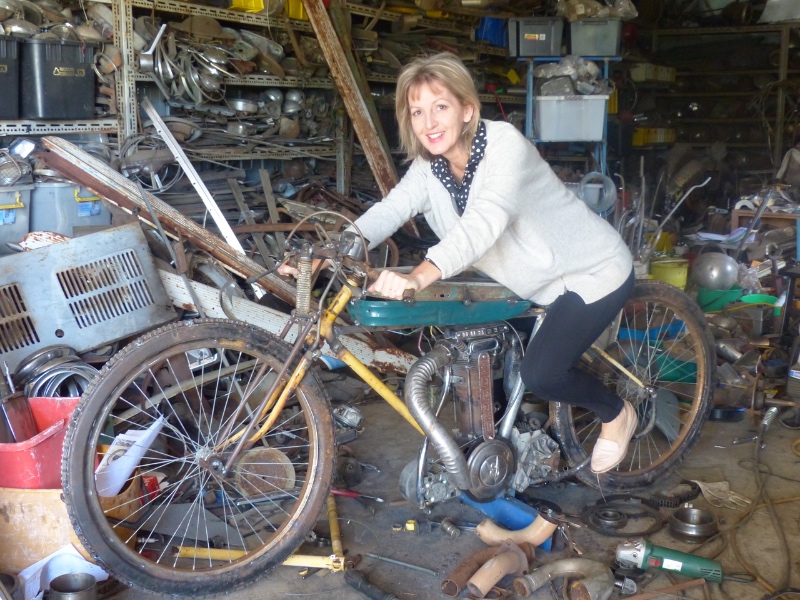 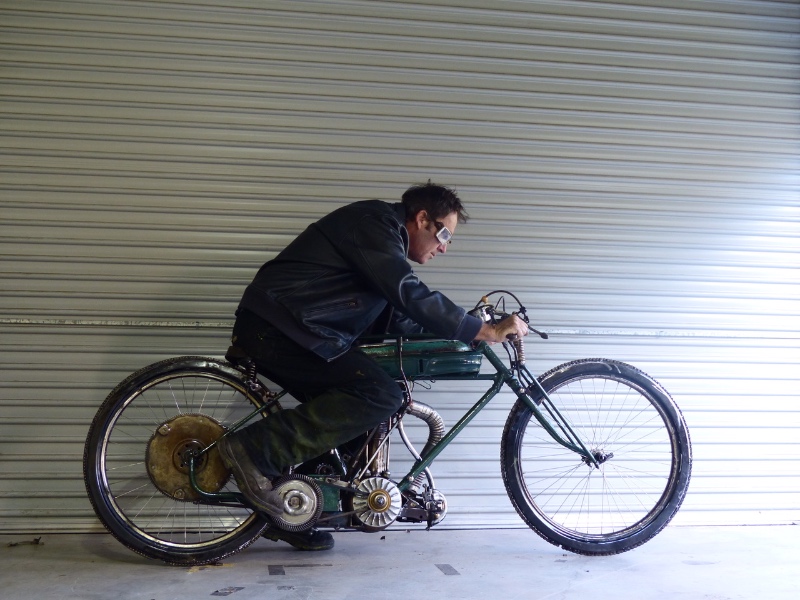 I get in on the act. It actually felt pretty comfy. I wished it could go.

I had a bit of fun with the details on these large scale works. The ‘ Turbo engine in the Morgan ‘ is literally a turbo, the ‘ Gear Box ‘ on the bike is a box of gears, and the gauge on the bike reads decibels. Back in the day, real race bikes would have had no problem registering lots of them.  I also had some fun with the rider’s shoes. I noticed that in some of the old photos of these guys at Brooklands they are racing in lace up dress shoes.  Probably their only pair of shoes, made to last by a skilled tradesman. 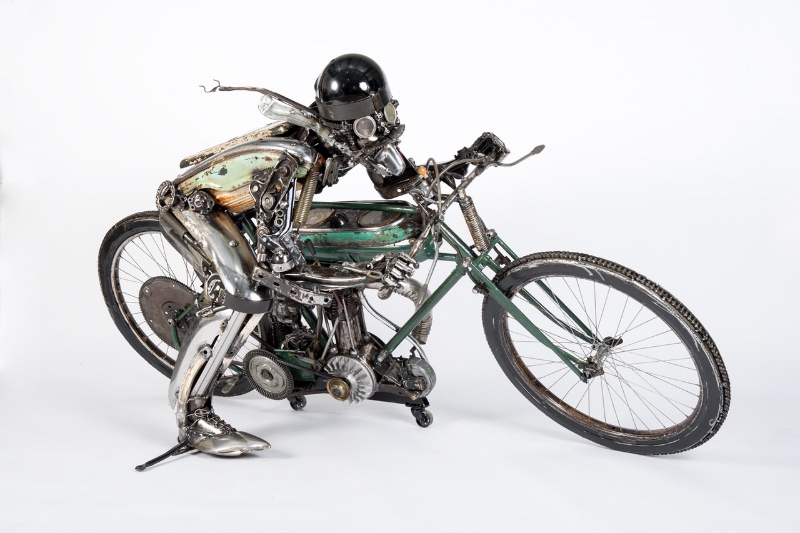 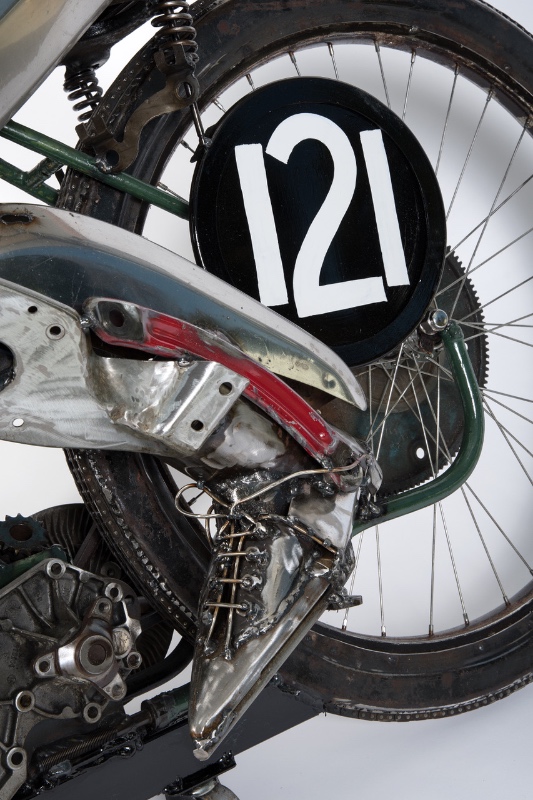 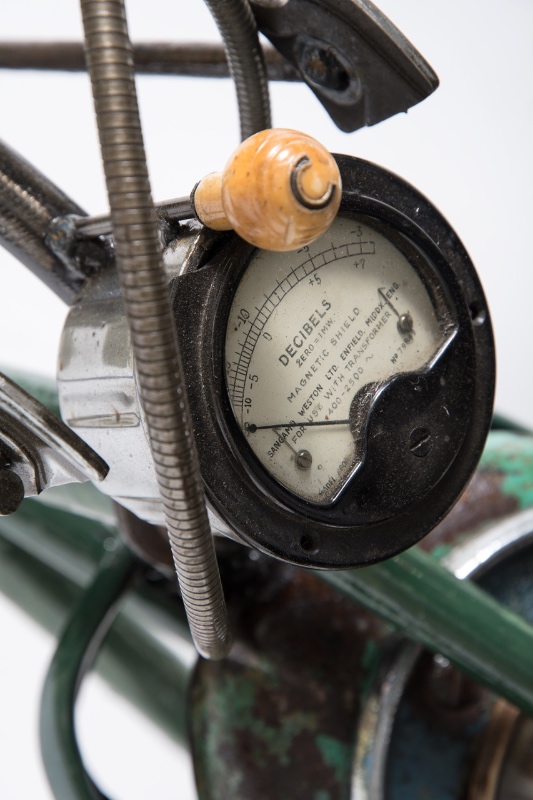 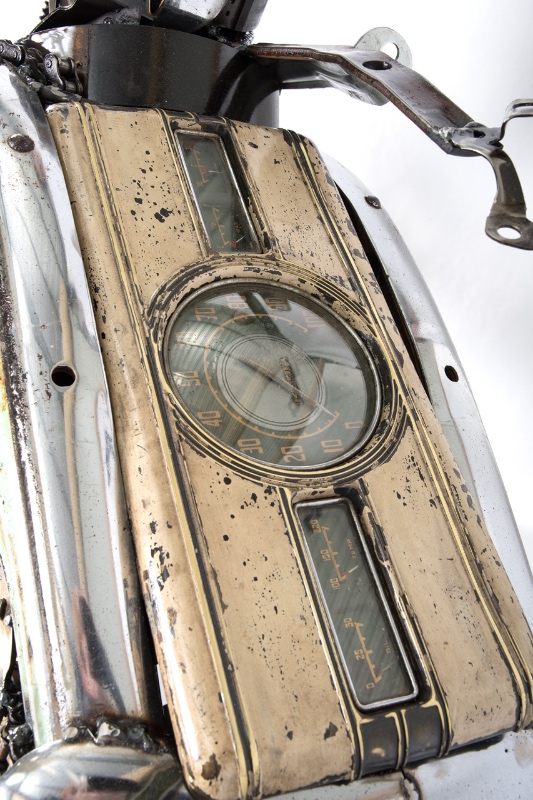 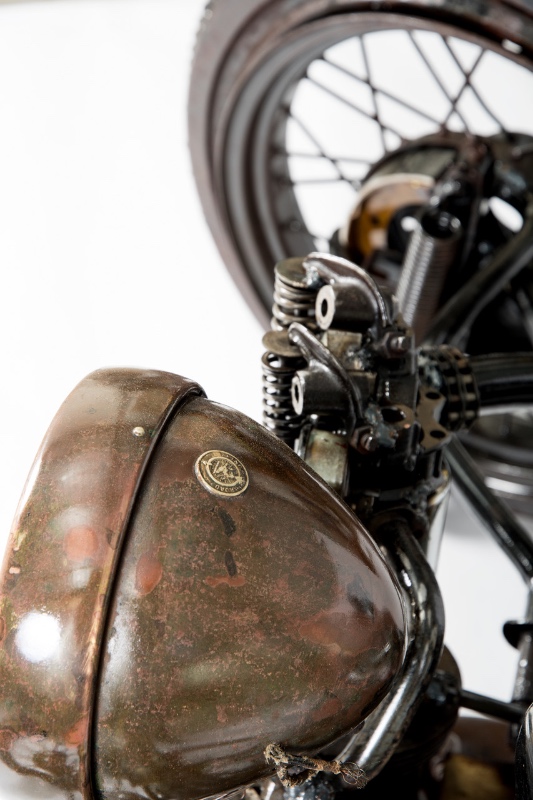 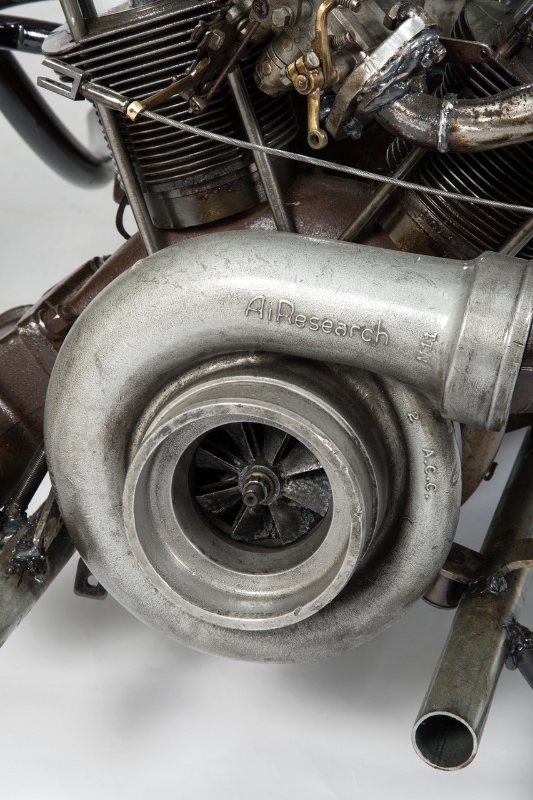 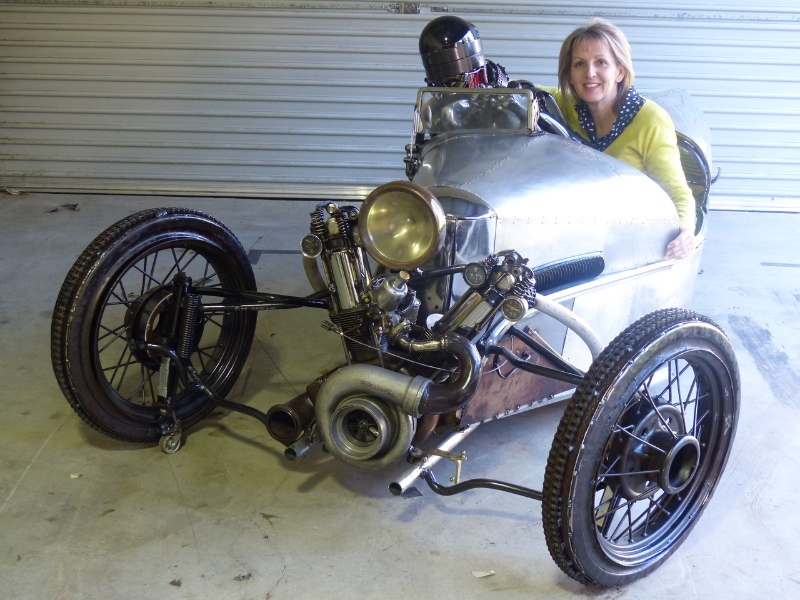 Going for a ride

In August I will be having my first Solo Exhibition with Robinson’s art gallery in Knokke Belgium.  The show opens on Saturday the 12th.  If you are in that part of the world please come and have a look.  There will be some very nice pieces in the exhibition 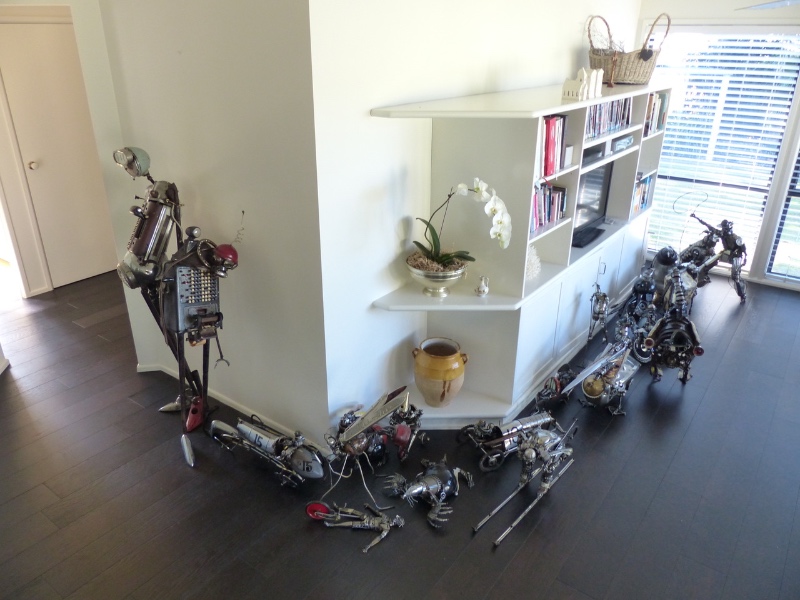 My lounge room full of sculptures waiting to be sent to Belgium. 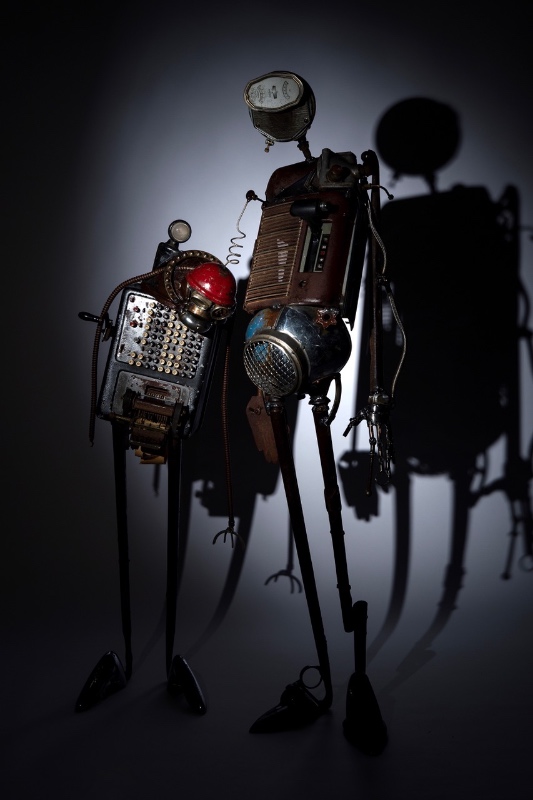 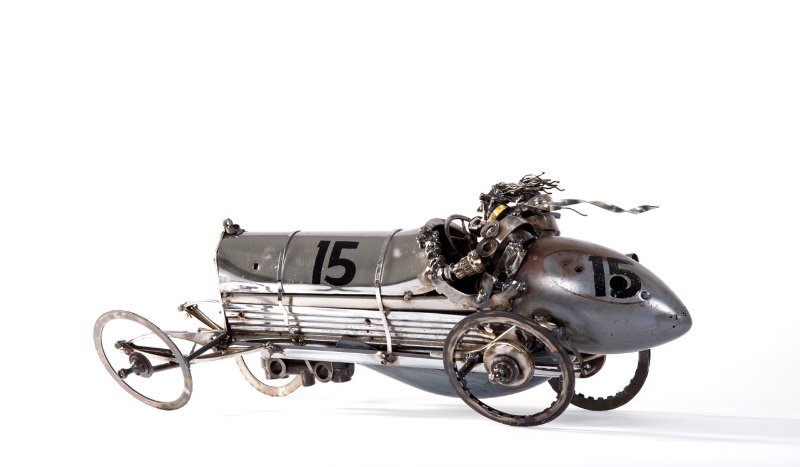 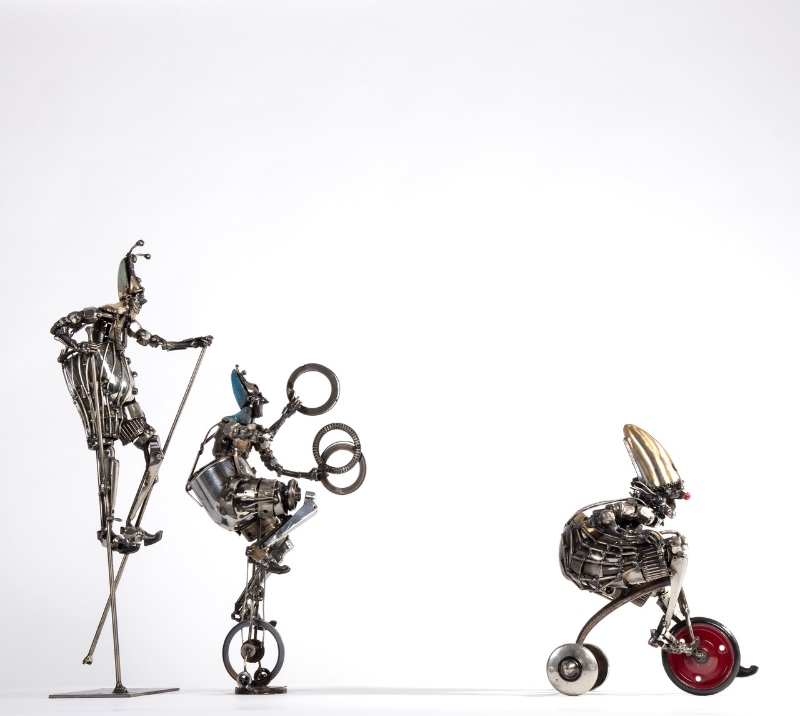 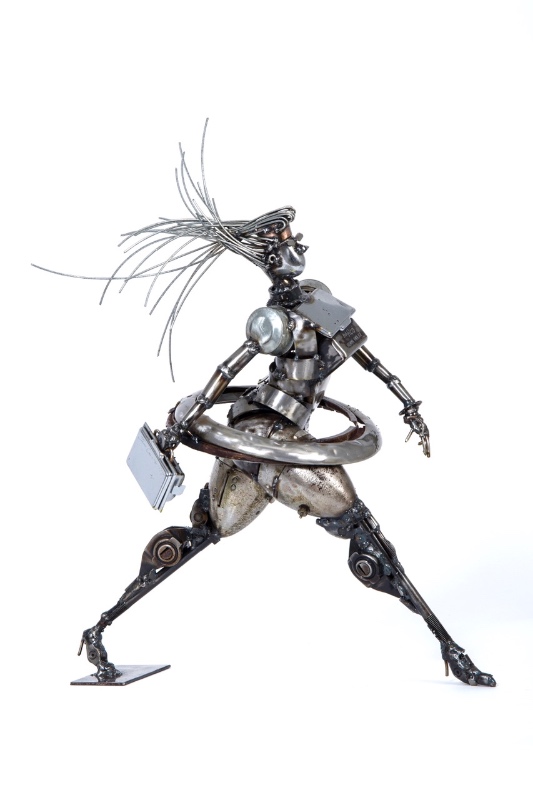 I often get asked if I draw my sculptures before making them.  Generally the answer is no.  Usually I just get a firm picture in my mind of what I want to achieve.  My mind’s picture is probably about the imagining the subject’s character more than how the resulting sculpture will look.   On occasions though, I will do some very quick sketches to firm up the subject’s stance in my mind.  Really basic.  Here is one for the ‘ Obsolete Machine.’ 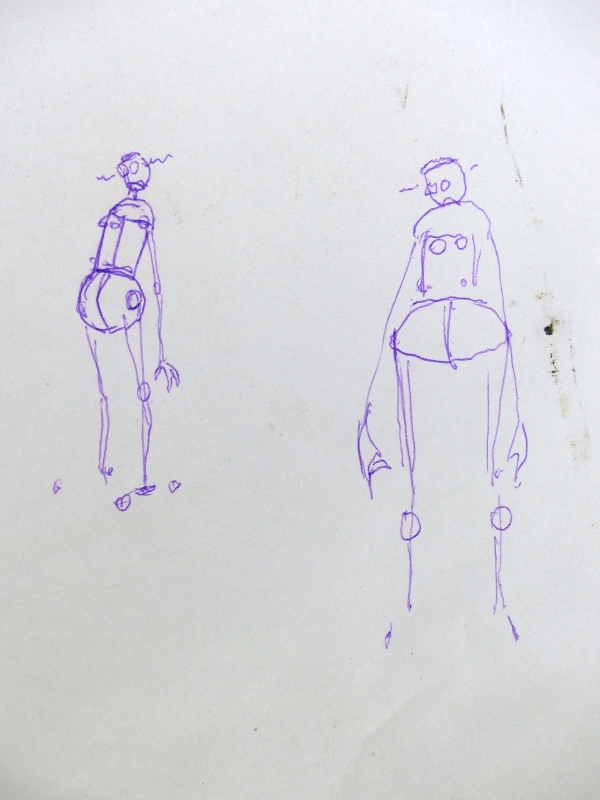 My ‘ Obsolete Machine ‘ thinking with a pen. 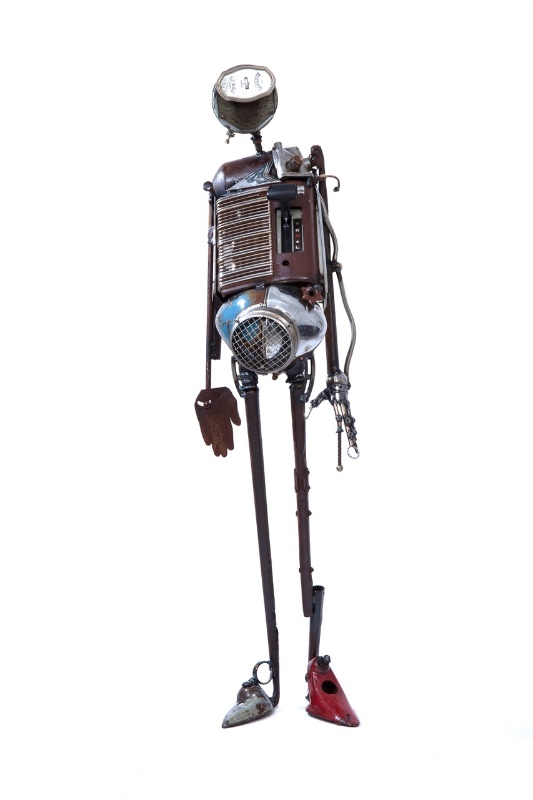 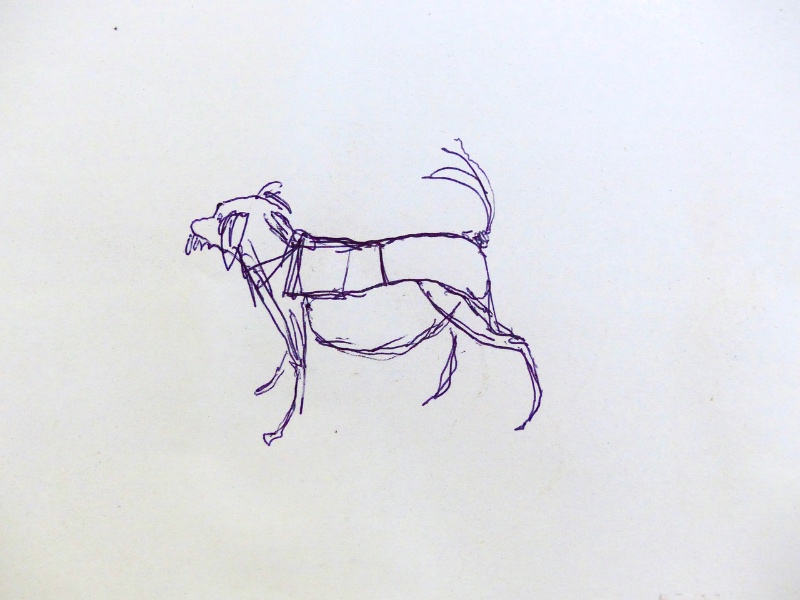 Drawing is something that I like to do, but rarely find the time.  One day I will make time to do some paintings.  One day out of the blue I’ll put together an exhibition of Motor Racing inspired two dimensional art….Just because I want to……Maybe.  Oddly, even though I usually don’t for sculptures, I think I would do preliminary sketches of paintings.  Below are some I did in my little note book that I record my sculpture dimensions in.  Like doodling in your school books. 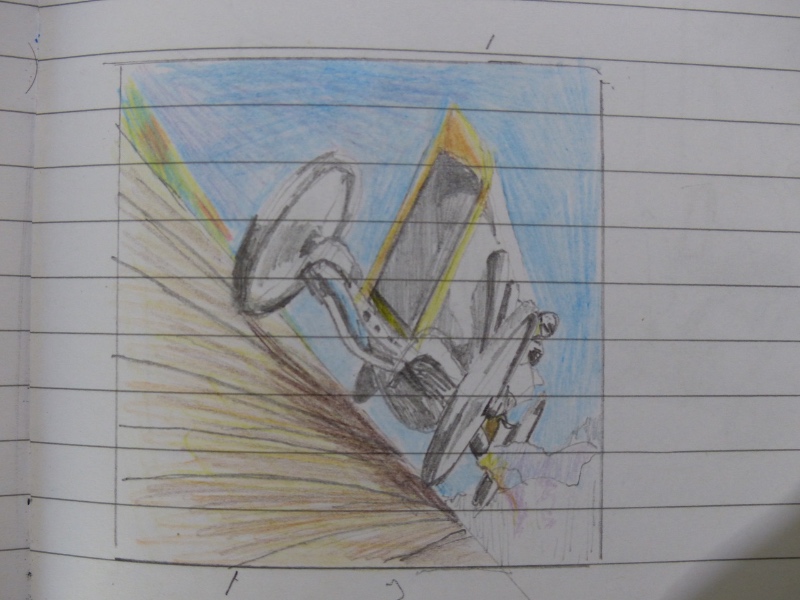 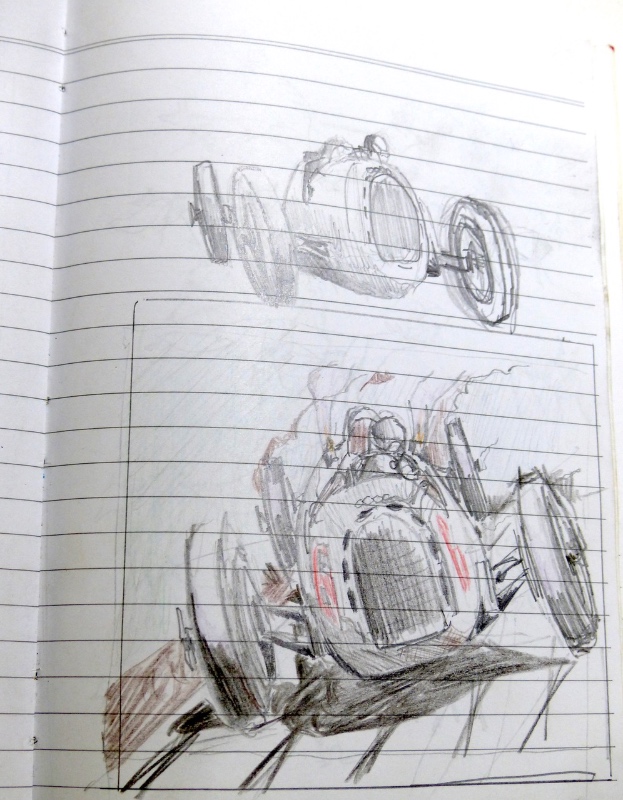 One more note on old car stuff.  My T Model Speedster project got moved from one shed to the other to make some room for me to build the Morgan and Bike. It was nice to see it from further away than two metres. It is also the first time that I had fitted those big skinny wire wheels.  I got all very enthused.  After the DS is finished maybe. 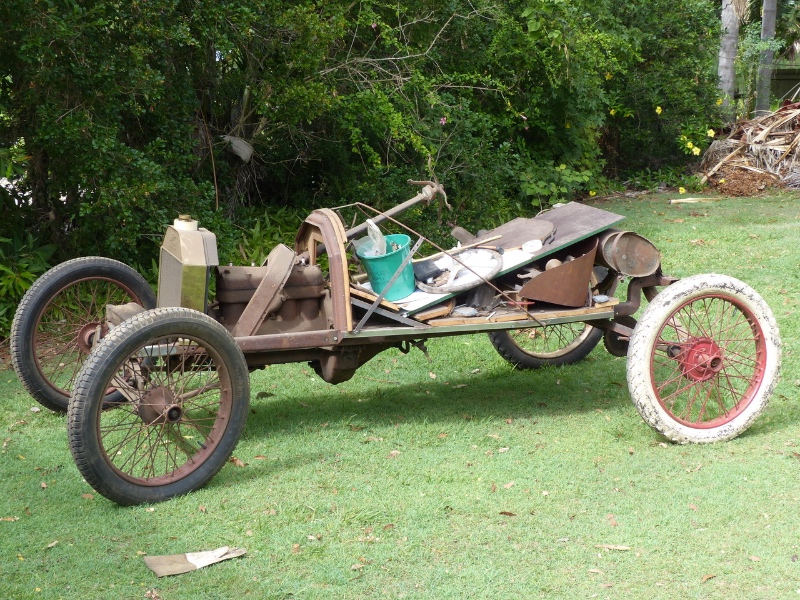 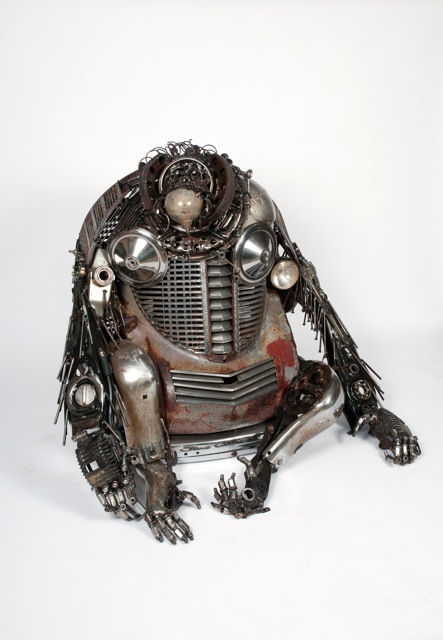 This life sized Orang-Utan is back at Michael Commerford’s Sydney Gallery.  She features a 1930’s De Soto grill and lots of other interesting parts.  A nice big sculpture.