Well it’s been months since my last post. Obviously I’ll just have to accept that I’m just plain inconsistant. But as usual I have been busy, so that will be my excuse yet again. The second of my large commissions destined for the U.S. is now complete and installed. This one is in Seattle. It is of a chap riding a bicycle with his Alaskan Malamute dog running alongside. I think these dogs are the mascot for their big football team over there. I found a nice old bike frame at the local tip, made some steel tyres out of timing chains, and removed all the spokes to create the movement.  Actually I really liked the old bike, and got a bit tempted to keep it and put it back into service. It looked pretty cool to me.  But then I’m always wanting to adopt old mechanical things. If it has wheels even better. 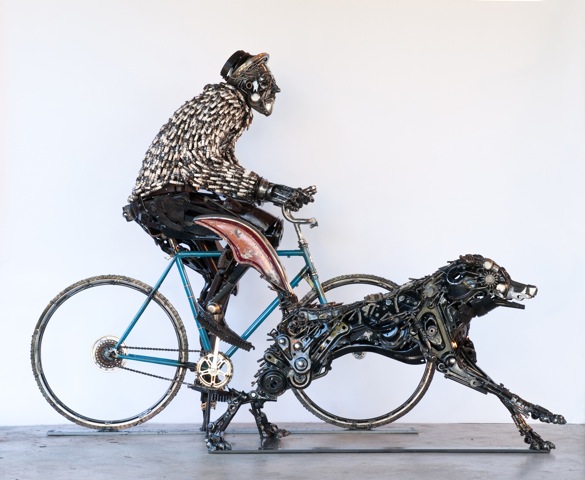 This piece was quite a challenge, and I had a couple of efforts at the rider’s head before I was happy.  The other tricky bit with this piece was trying to build in the strength that it needed, but still keep the light look of the bicycle. The spark plug jumper made him rather top heavy. Does everyone else use the term ‘ jumper ‘ for a heavy woollen pullover, or is that just us antipodeians. 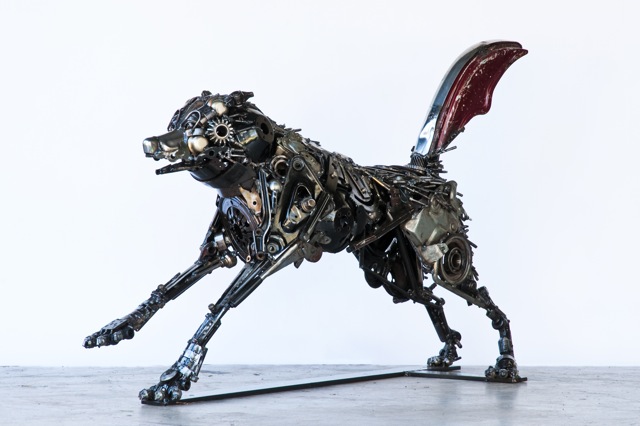 On the spark plug theme, I also had a commission for another Ram. These are pretty time consuming, but always come together well. Spark plugs and Sheep go together like Strawberries and Cream. Who would have thought…..Oh hang on, I did. I must say a big thank you to the mechanics, that have been keeping their old spark plugs aside for me. Most of them have not even seen what I can do with them, but they just do it because some guy has asked them to. It really is good, that most people are just helpful if they can be. Even if they perhaps think I might be a bit odd. 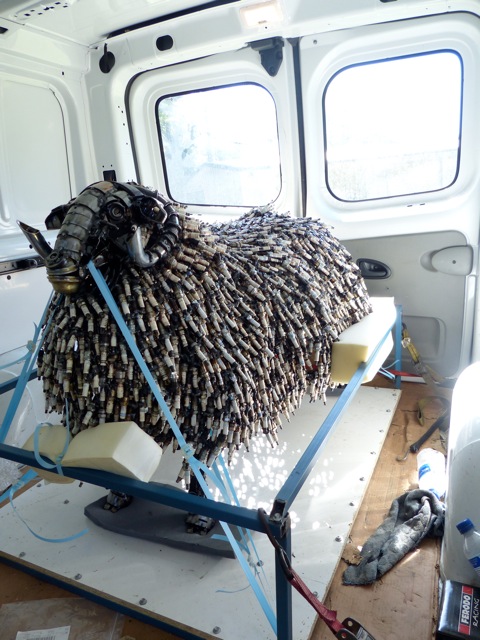 Ram going for a Van ride

The other things keeping me busy are two upcoming exhibitions. The first will open september 8 at ‘Linton and Kay Gallery’ in Perth. These pieces are there now, so if you are in that part of the world go and have a look. I will be following that up a month later with another exhibition with ‘Michael Commerford Gallery’ at Edgecliffe in Sydney’s east. Unfortunately I won’t be able to make it to the opening of the ‘Linton and Kay’ show. Hopefully I will get there for the next one.

Here is an example of how things evolve. Who can guess where this is headed……………………. 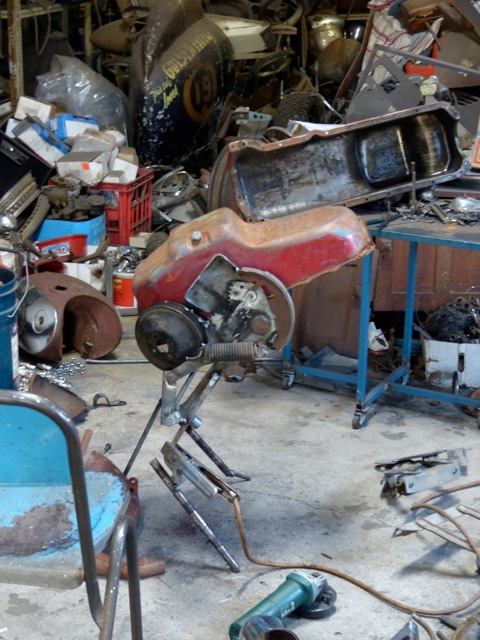 I was not sure myself that this was going where I wanted.  But it worked out in the end.  You can see it at ‘ Linton and Kay Gallery’, and if you guessed right you’ll know that it is indeed a Kangaroo. 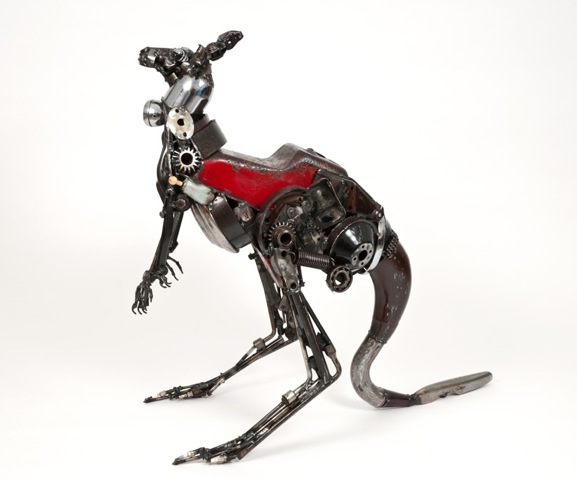 Here are a few more pieces that will be in the Perth show this coming month……….Check out their website. 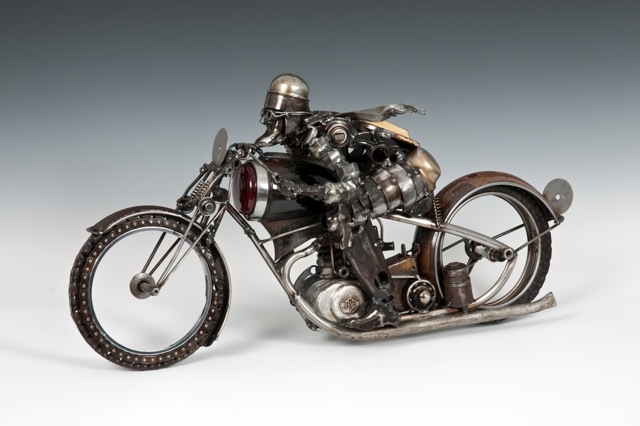 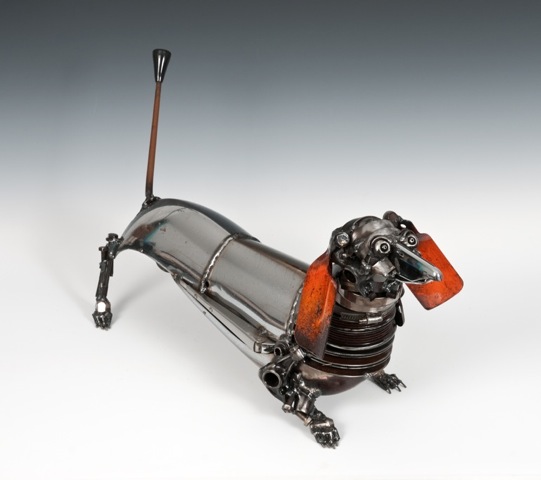 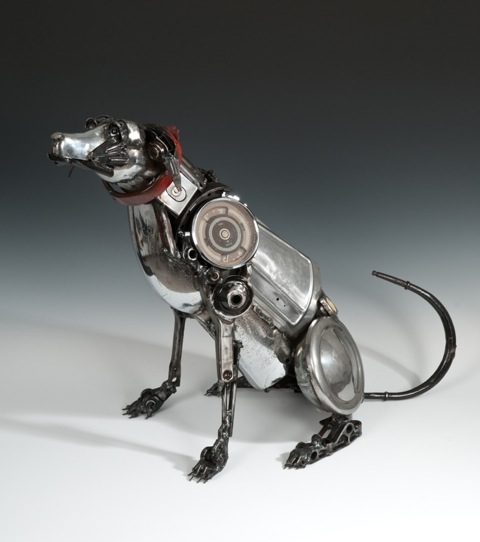 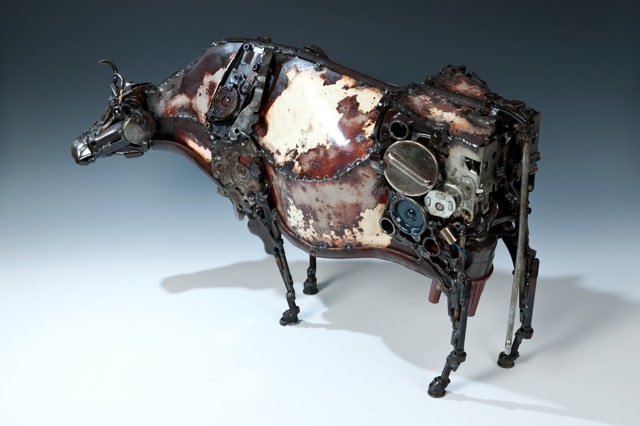 The other thing that has been keeping me busy is our house. I have fitted a new kitchen and 90 sqm of timber flooring. Oh, and painting. One more thing I did on a whim, was to whip up a new kitchen table. Not that we needed one. It’s just that I came across some old Brickies planks destined for the tip, and thought ‘ I know what I’m doing with them’. Did I write something earlier along the lines of, ‘ if it has wheels all the better.’ Yes this picture is between floor coverings. A look that I rather like, but hey I’ve already had the floor boards. That is a part of the huge stack of them in those boxes in the top right of this photo. They had been there in the middle of the room for longer than I can admit to…..But I had Spark Plugs to weld. The floor is pretty well wooded now. 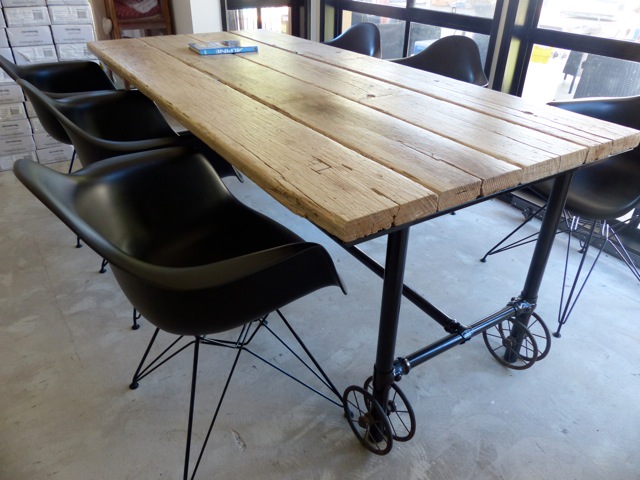 Have I justifed how busy I’ve been yet? Can I throw in our eldest son’s wedding. How about repairing my Formula Ford racing car after being forced off the track at 180 kph when someone didn’t see me.  Always reassuring that. Actually after I did repair it, I competed at a round of the Australian Formula Ford series. Something that I don’t normally do. They have two classes in the same race, the more powerful Fiesta engined cars and the traditional Kent engined cars. I managed to be fastest Qualifyer in the Kent class. Real happy with that at 52 years of age. Didn’t quite have the speed in the races but still finished second for the weekend. The other ‘ Car thing ‘ of note was taking my beloved Porsche 356A coupe to the biggest sports car show in these parts. ‘ Audrey ‘ as she is known in our family, named after Audrey Hepburn, won best of show for pre 1970 sports cars. The biggest class of the show! A very big surprise as it is a rare thing for me to take her to a car show. And then she got the job of delivering Kelsey, our new daughter in law to the big ceremony…….just as she did with Bec, our first daughter in law last year. 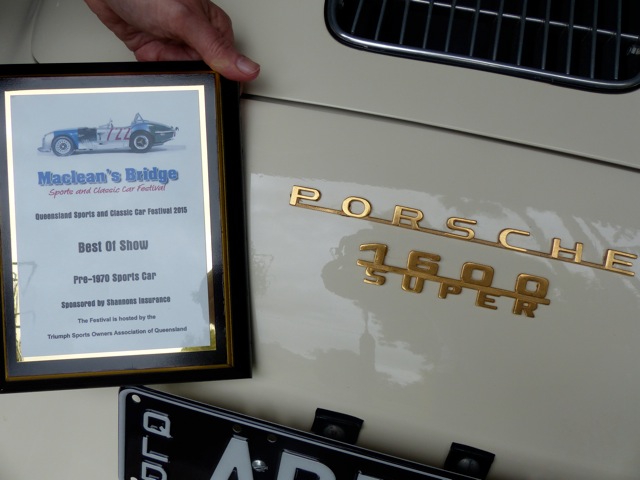 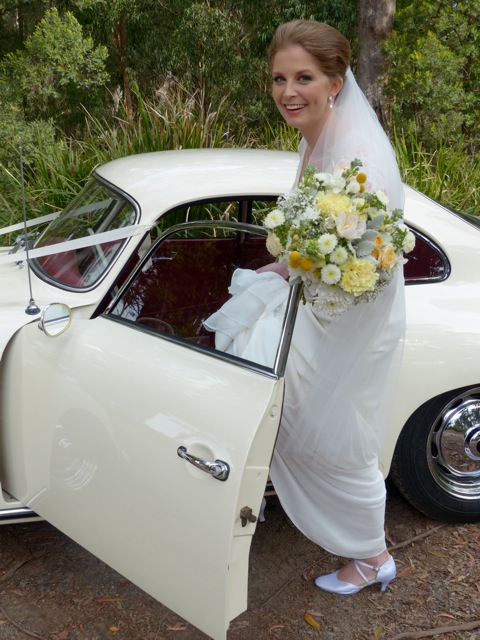